The history of Virginia began in the 1500’s when visited by Spanish Explorers. The occupants at that time were tribes of Algonquain, Iroquoian and Siouan peoples in the late 16th century, Sir Walter Raleigh and Queen Elizabeth 1st named the area – Virginia in honor of the Virgin Queen.

The first permanent English settlement, backed by the London Company, was founded in 1607 by John Smith and other colonists, including John Rolfe who later became the husband of Pocahontas. The main reason for establishing a colony so far from the English homeland was purely economic. The colonists hoped to find gold and spices and land to grow crops. What they found was a hostile environment. The English gentlemen were ill suited to deal with the weather, swamps, poisonous snakes and soil that was not suited for crops. Most of the original colonists were gentlemen who had no real ability for farming. A friendly relationship with the local natives helped them survive. They finally found success with Spanish tobacco. 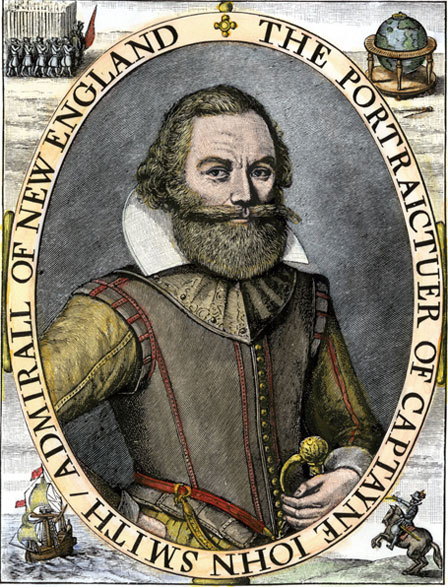 What is Virginia known for?

Since Virginia was the site of the first permanent English settlement, the state is known as “the birthplace of a nation.” As well as the “Mother of Presidents” Eight Virginia born gentlemen succeeded to the highest office in the land, including four of the first five presidents.

The history of this state spans the Colonial era to the modern-day flight into space. Visitors can step back in time by visiting Virginia’s Historic Triangle (Jamestown, Colonial Williamsburg and Yorktown) marking the very beginning of our history. They can then head for Hampton, the site of NASA, where space flight was researched and developed.

Foods, Wine, Ski slopes, mountain views and beaches, are some of the choices that the visitor will discover.

Due to the proximity of the Chesapeake Bay, Atlantic Ocean and many rivers and waterways, seafood is found on many a menu and Virginia Beach is one of the East Coast’s most popular beach destinations. In the Western part of the state, the Blue Ridge Parkway, the Skyline drive provide beautiful views as well as orchards laden with fruit. Dare we leave out HAM – yes, Virginia is the birthplace of the tasty ham that even Queen Victoria had on her table at times. 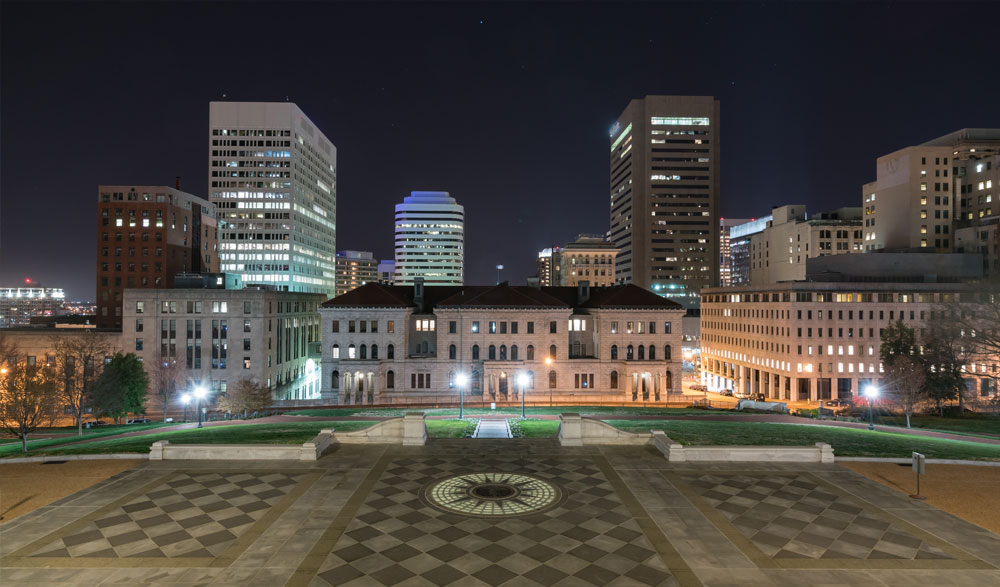 Why is Virginia for Lovers?

This award-winning tourism and travel slogan was developed in 1969. In 2012, it was named by Advertising Age as “one of the most iconic ad campaigns in the past 50 years.”

Love speaks of passion and Virginia has many sights, sounds and flavors for every age and every interest that inspire such passion! There are mountains to climb, ski slopes to careen down, beaches for sunbathing, surfing and swimming, theme parks with rides to thrill and delight, outdoor activities, sports, festivals and much more. There is much to see in Virginia and much to love! 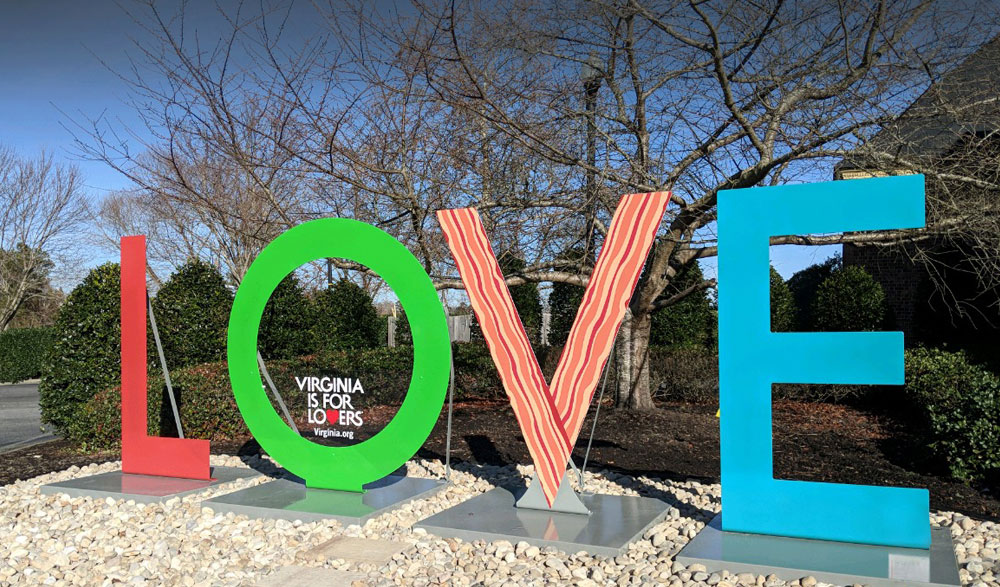 Isle of Wight County history is closely tied to the history of America. John Smith and his men crossed the James River in 1608 to trade 30 bushels of corn with the local Native Americans. It was noted at that time that the land was very similar to their settlement site in Jamestown and perhaps this was a new area to explore and settle another area in the new world. It was also noted that the native tribe, (known as the Warrosquoyackes), was friendly to the settlers and willing to trade. They even invited the group to spend the night of December 29, 1608 with the tribe.

The first English settlement made in Isle of Wight was that of Captain Christopher Lawne, Sir Richard Worsley, knight baronet, Nathaniel Basse and John Hobson, who were gentlemen. On April 27, 1619, they arrived at Jamestown with one hundred settlers aboard the ship Marygold. They settled across the river from Jamestown near the mouth of what became known as Lawne’s Creek.

Tragically Lawne and four-fifths of those who came with died within a year due to the location they chose was low, swampy and mosquito-infested. The group was given an extension of time to establish their settlement and the property should be known as Isle of Wight instead of the dreaded Warrosquoyacke. There had been many spellings and pronunciations that caused confusion. The name Isle of Wight was probably chosen for the home of one of the settlers, Sir Richard Worsley, located on an island off the coast of England.

Other settlers arrived with promises of land that became plantations on the James River. Most of these men were well educated gentleman and the promise of 50 acres for each immigrant imported was an exciting proposition for land and the promise of adventure!

Adventure was what they found with hard work, failure of crops, disease and the massacre by the natives in 1622 and again in 1644. Despite all of these adversities, the colony continued to bring settlers, plant tobacco, ship lumbar and shingles back to England.

Over the years it was attempted to create actual towns along the James River. There were a lot of failures but finally in 1752, Smithfield was made a town by law. This area had already quite a large trade. Two tobacco warehouses had been established before the General Assembly passed an act to incorporate the town.

Arthur Smith IV laid out a portion of his land on Pagan Creek into streets and lots. The location was deemed healthy and open to trade and navigation and would hereby be known as “Smithfield.”

Laws were established, a courthouse was built and one of the first and most important laws was granted to the sheriff. If anyone built a wooden chimney, it was to be torn down! 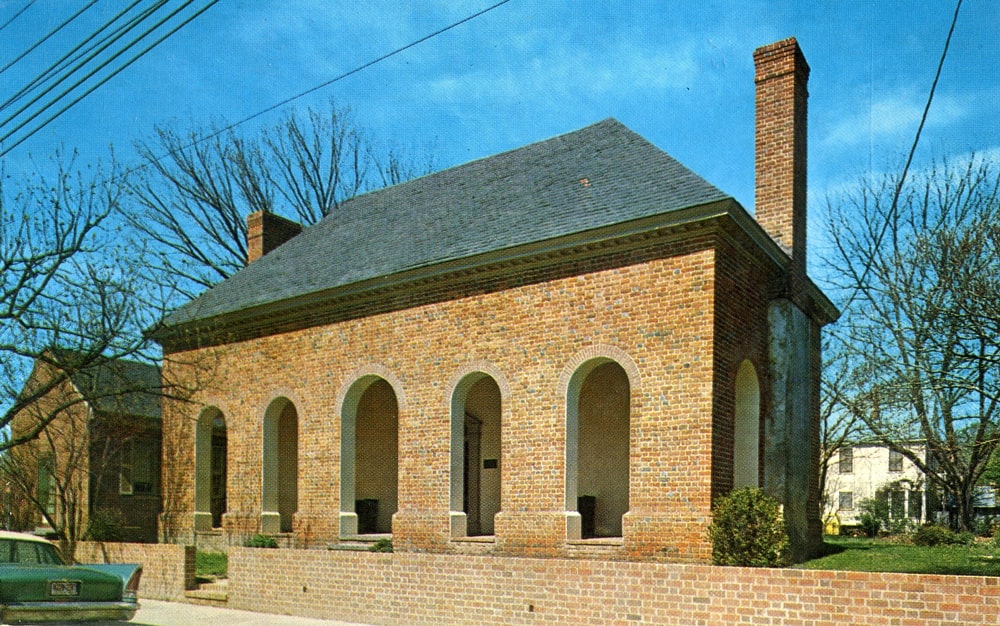 Visitors today can walk these same streets, enjoying the lovely homes, some Colonial, Victorian, Gothic – all in beautiful condition along the banks of the Pagan Creek emptying into the Pagan River and continuing to the James.

The history is alive and well in Isle of Wight County. Our two incorporated towns, Windsor and Smithfield are thriving and we look forward to continuing our hospitality for folks from all over the world.